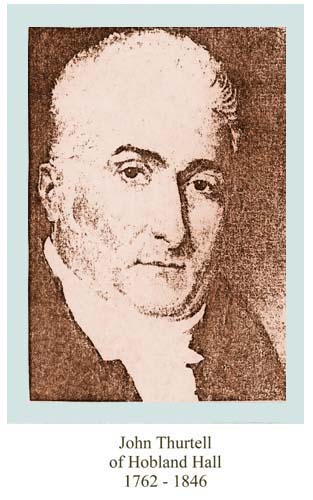 The above pictures of John and Anne Browne Thurtell were made from photocopies of snapshots of portraits that were sent to Michael Moorshead by his aunt, Maude Moorshead, in about 1975. The portraits were at that time in the possession of Roger and John Murray, grandsons of Dr. George Murray.

The numerous descendants of John and Anne Browne Thurtell have long considered Hobland Hall their "ancestral home," where family legend showed their children were all born. Hobland Hall, pictured below from a photo taken in about the 1950's, was painted by Harriet Thurtell, photographed several times, and has been visited by various descendants of John and Anne Thurtell over the years. The original of this photo has been missing the lower right corner for over 35 years. It was repaired using Adobe Photoshop for this web page. A large hand-colored version of the same photograph is in the possession of Michael Foresman. 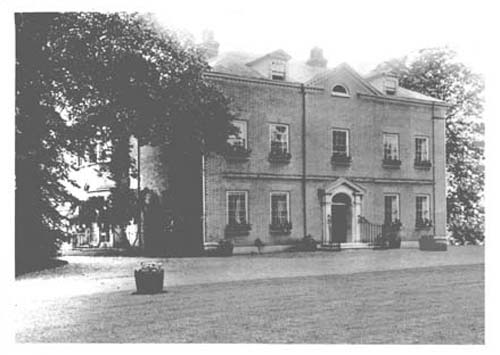 Information received from Peter Murray in 1997 shows John Thurtell was born August 12, 1762. He grew up in Flixton Parish in Suffolk, England, since his parents moved there by 1772. He was a land surveyor of Norwich and owned numerous properties in Lothingland Hundred, Suffolk, where he lived. He settled in Hopton Parish in Suffolk prior to his marriage. The IGI file at the LDS Family History Center shows that John Thurtell was christened August 29, 1762, at St. Julian, Norwich, Norfolk, England (Batch C044421). It also shows he married Ann Brown at Blundeston, Suffolk, England, on September 25, 1787 (Batch 7913831).

Family tradition relates that John Thurtell and Anne Browne were married in a triple wedding ceremony. Her sister, Susannah Browne married his brother, Thomas Thurtell, and her brother, Robert Browne, married his sister, Sarah Thurtell, on the same day, as confirmed by records of the Church of St. Mary, Blundeston, Suffolk, England. Three sets of tea cups and saucers (cups without handles) were presented to the three brides on their wedding day by the Lowestoft China Works. The grandfather of the three Brownes married on that day was Robert Browne, one of the founding partners in 1757 of the Lowestoft China Works. According to information from Mrs. E. G. D. Murray, who grew up in Blundeston, near Lowestoft, Sparrow's Nest is a big and beautiful park at the very north end of Lowestoft, where the main street of Lowestoft turns left. The park goes right down the escarpment. There was no house there in the early 1900's, but there was said to have formerly been a big beautiful house somewhere in the park.

A letter to Irene Thurtell Peters dated September 29, 1964 (copy in possession of Susan Persia Thurtell Miller) from James L. Buck, Birds Eye Food Ltd., Hobland Hall, Bradwell, Great Yarmouth, Norfolk, England, states that Hobland Hall is located in Suffolk, but the mailing address is Norfolk. The villages of Hobland, Lound, Flipton, Bradwell, Belton, Hopton, Ashley, Fritton, Belton, and Blundeston are all within 20 minutes horse ride of each other; and each have their own church (all Norman). The 12 children of John and their offspring have records and tombs in nearly all of these villages. There has been a church in Blundeston since the 7th century, and this is described by Charles Dickens in the opening pages of "David Copperfield." The lettering in the name Thurtell has changed from the early times as from Thurkeld, Thurked, Thurtle, and lots of offshoots of Thirtle. Inside the doorway of Hobland Hall is a brass plate that goes back at least to the 13th century. For over three centuries the estate was owned by Magdalen College, Oxford, and history records many famous tenants. On January 24, 1961, the Hall was almost destroyed by fire. Only the basement and exterior walls survived. Mr. R. G. Carter reinstated the Hall to first floor level, retaining the Georgian architecture as far as possible. The Hall was reoccupied as business premises of Birds Eye Foods in the autumn of 1961. James Buck from Birds Eye Foods corresponded with Irene Thurtell Peters in the 1960's.

Additional information was received from Frank Sayer, Social History Librarian, Norwich Public Libraries, from September 14, 1964, sent to James Buck, with a copy sent to Irene Thurtell Peters and a copy of her copy in the possession of Susan Persia Thurtell Miller. Hobland Hall (Hobbeland's or Hopland) is a manor held at the time of Henry III by Henry de Hopeland. In 1604 it was held by Sir John Fastalf, who gave it to Magdalen College, Oxford. Lessees included: 1724 Augustus Schultz, 1949 Gerard Trotter, 1768 David Urquhart, 1793 Thomas Fowler, and in 1823 John Thurkell. Subsequently Tom Barber held it and later Mrs. Barber and Colonel Lucas. Ipswich Journal 11th and 26th July 1823 has adverts for sale of this manor at the Bear Inn, Yarmouth, 9th August 1823, by order of the assignees of the estate of John Thurtell, a bankrupt, of the Equity of Redemption of Estates situated at Bradwell, Hopton, Belton, etc. of the sites of the Manors of Hobland and Hopton, also a mansion house called Hobland Hall, several farms, etc., containing about 630 acres. In 1844 T. Barber occupied Hobland Hall.

After their marriage, John and Anne Thurtell lived at Hobland Hall, Bradwell Parish, Suffolk County, England, for many years. In 1823 they moved to Hopton Hall, Hopton Parish, Suffolk, England, only three miles away according to Thurtell family records. In that year Hobland Hall and other extensive properties belonging to John Thurkell (Thurtell), a bankrupt, were sold by auction in Yarmouth as announced in the local newspaper. Either John Thurtell avoided total ruin, or possibly Hopton Hall where he afterwards lived was by then the property of his eldest son. This was the time of an unprecedented number of bankruptcies in England. Indeed, these must have been grim times for our family, for 1823-4 was also the time of the Thurtell murder scandal, in which another John Thurtell, a nephew of John and Anne Browne Thurtell, whose mother was Anne's sister and whose father was John's brother, was convicted and executed for the murder of William Weare, a notorious swindler and sometime solicitor. The Thurtell name was blackened, notwithstanding some public sympathy for the murderer, and as a result our John Thurtell and several other members of his family appear to have used the name Turner instead of Thurtell for a time. Two sons of John and Anne Thurtell, including Peter Murray's ancestor Alfred, instead adopted the name Murray which has been retained by that branch of the family ever since.

Later John Thurtell lived in or near Norwich where he died. In early 1842 a letter from Elizabeth Anne Thurtell to cousin Edward Brookes Thurtell relating news learned from England stated, "Grandfather still is declining and will not so he thinks be long spared, but he walks into the City twice a day, and is in his 80th year." His death certificate shows that he died at Willow Lanes, St. Giles, Norwich, on September 10, 1846; and the death was registered two days later. John and Anne Thurtell were buried very prominently inside the church at Blundeston, Suffolk, England, in the floor to the left of the old font. In 1993 they were moved during renovations and have been imbedded in the wall inside the church.

John and Anne Browne Thurtell had twelve children who survived childhood. All twelve were believed to have been born at Hobland Hall, Bradwell Parish, and christened at the Old Font in the Church of St. Mary the Virgin, Blundeston. However, contemporary records of baptisms in the parish of Hopton have now been found for all of the children, and in some instances the birthplace too is given as Hopton. The youngest son was born in Bradwell in 1805, so perhaps by then they were living at Hobland Hall.

 Links to other sites on the Web