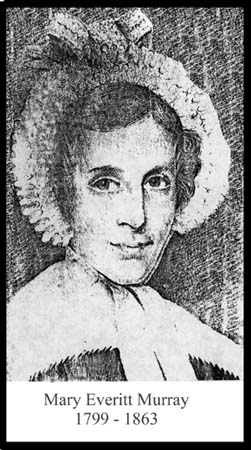 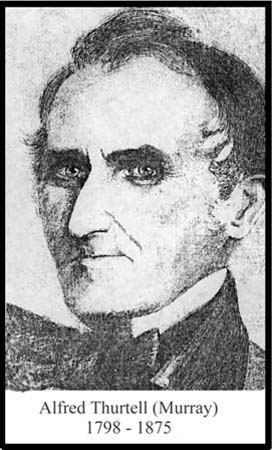 Information received from Maude Moorshead completed in about 1975 showed that the portrait of Alfred Thurtell Murray is a charcoal drawing by Harriet Rabone while the one of his wife Mary is a pencil sketch done by one of her sisters.

Alfred Thurtell was one of the children of John Thurtell and Anne Browne Thurtell. He was born about September 3, 1798, at Hobland Hall, Suffolk, England, and was baptised February 23, 1798, at Hopton, Suffolk (the Parish Register was apparently still using the old system of numbering years including February as part of the prior year). Alfred grew up at Hobland Hall and saved his brother Benjamin from a bull in the stable according to the latter's family.

Alfred's first cousin was the notorious John Thurtell, who was hanged in 1824 for the murder of William Weare. Alfred's bride- to-be, Mary Everitt of Caister Manor, Caister Castle, and/or her family objected to the last name Thurtell due to the scandal. On the day Alfred Thurtell married Mary Everitt in the Parish Church of Caister-on-Sea, Norfolk, England, on December 29, 1829, he signed himself Alfred Thurtell Murray.

It is unknown why the name Murray was selected. Alfred's older brother James had already added the surname Murray. That name might have been chosen since they were good Presbyterians, and Murray is a good Scottish name.

Alfred, Mary, and their children emigrated to South Africa to become part of the large British Settlement in what is now the Eastern Cape. Their son, Walter Everitt Murray, was born in 1837 on their farm "Layton" near Salem, which is near Grahamstown. Walter Everitt Murray was the first infant christened in St. John's Church, Bathurst, the oldest Anglican Church in South Africa. The family was no longer using the last name Thurtell at all by this time. Their home was burned by raiding tribesmen twice, and they moved in 1842 to Somerset East, South Africa, where their youngest child Jane (Jinny) was born in 1842. She was christened by the Dutch Reformed Predikant there, the Reverend John Pears, one of the many Scots ministers who had joined the Dutch Reformed Church.

Many years later, in 1855, the eldest daughter of the Reverend John Pears and his wife, Louisa Ann Ashcraft Pears, Ann Christine Pears was to marry the second son of Alfred and Mary Murray, Alfred Everitt Murray.

By 1856 Alfred and Mary Murray moved to the town of Graaff Reinet in South Africa. There Alfred was a Justice of the Peace, a town planner, and probably Churchwarden. Mary died in Graff Reinet in 1863. Alfred died there on April 25, 1875; and he is buried on his son Walter's farm Hoeksfontein in the Karoo.

The above pictures are from the collection of Michael Mooreshead, and the
biographical information was provided by Peter Murray and Maude Moorshead.